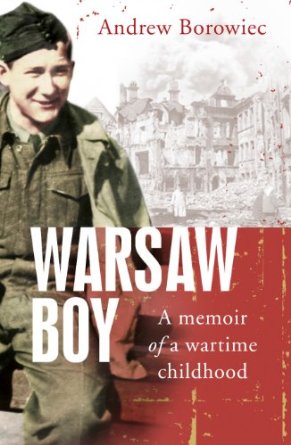 This was the nightmare of my Polish brother-in-law, Andrew, an eleven-year-old schoolboy in short pants when the Germans invaded Poland in 1939, and so started World War II. As the Nazis conquered much of Europe – slaughtering Jews and abducting able-bodied men to work on German farms – underground resistance groups in occupied countries waited to support an invasion by the Allies.

When he was fourteen, Andrew ran away from home to join the poorly-equipped Polish underground army. Fighting the well-equipped Germans were poorly-equipped locals, often old men and boys like Andrew. Within a short time Andrew had supplied himself with a rifle, ammunition, boots and a uniform, by snatching them from dead bodies.

It is strange to think that my gentle, charming brother-in-law was – as a child – a killer as well as a victim; and that he stoically accepted the fact he might be killed before bedtime.

In June 1944 the Allies invaded France and, shortly afterwards, the Warsaw Uprising took place. As the city was blown up noisily by bombs and shells, Andrew writes, “Sometimes I helped remove civilian bodies from bombed buildings. This was essential work. We had to find the bodies before the rats did.”

For two months, Andrew – still only fifteen – fought in the streets and in the disgusting Warsaw sewers, as the city was torn apart, until he was wounded in the leg and so taken prisoner by the Germans.

Andrew’s story of defiance, bravery and survival has an understandable strain of melancholy and sorrow. But look on the bright side. Firstly, Andrew managed to escape, and eventually reached the USA where he became an influential journalist. Secondly, Andrew’s new book Warsaw Boy – much of it scribbled during the war – is a real-life Boy’s Adventure Story for all the supportive men I love who will always be fifteen on the inside. Eat your heart out, Indiana Jones.

Warsaw Boy by Andrew Borowiec costs £16.99 and is published by Penguin.