To Pack or Not to Pack It?

Once, waiting at the airport carousel, I saw a flurry of pretty underwear coming down the chute. Poor woman, I thought, then recognized the nightgown. My cheap suitcase had burst open.

A novelist has to tour a lot, so as soon as I made some money, I ordered two of those expensive silvery suitcases, upon which baggage handlers can tap-dance without denting them – I had read that George Clooney traveled with fourteen of them. Later I discovered that they each weighed the complete baggage allowance when empty and the inside was perfectly planned – for a man: it was like an exasperating computer programme, you couldn’t deviate from it for your personal requirements: the shirts went in the shirt place, the pants went in the pant place and the underwear place allowed only a couple of y-fronts.

Shortly afterwards, when a New York cab driver admired them, I said, “You can have them if you buy me two tough, canvas suitcases.” He did, and years later, I’m still using them.

I despair when I look at packing lists of friends who whizz halfway around the world with only hand luggage, a cashmere shawl and Chanel sunglasses.

Actress and National Treasure, Joanna Lumley’s miniscule packing plan was for a trip that was half camping in tents, half formal (an embassy visit). Her colour plan was black, white, khaki and one bright colour – pink (although it could have been purple or lime green). She took three pairs of comfortable trousers, two warm sweaters, t-shirts in plain colours, a lightweight, hooded rain-proof jacket, three bras, three pants, three cotton neckscarves and pyjamas. She added a warm jacket, in case the weather was colder than she expected.

Her formal outfit was all-black: heels, skirt, cover-up top, plus an interesting evening clutch, a string of pearls and as an alternative a handsome necklace.

Once I flew sitting next to the owner of a travel agency, who said she only ever traveled with on-board hand luggage because of the airport luggage holdups and losses. She showed me her bag. Inside was a change of beige underwear, two silk blouses, two no-crush silk jersey dresses, one crimson sweater, two pairs of navy pants plus two bikinis. She had flip flops, navy ballet shoes, one pair of really classy high heels, and a light, rain-proof egg-yellow jacket that rolled up into itself. She slept in a T-shirt. She traveled in a heavy wool jacket, skirt, plus sturdy walking shoes, and carried her heavy overcoat. 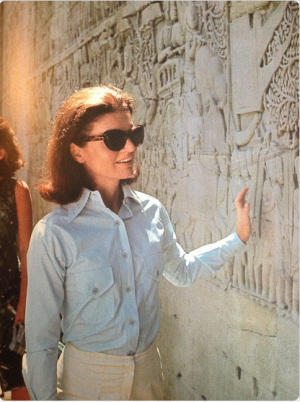 My packing prize goes to the late Jacqueline Onassis who once went to Cambodia on a short, jungle trip to see ruined temples, and this is what she took with her: her lover, two pairs white pants, two black shirts, two coloured shirts, black espadrilles, a gold jacket and gold sandals for evenings, two scarves, spare sunglasses and a change of underwear.

My handbag checklist:
1. It needs to be light.
2. It needs to take A4 size papers.
3. It needs a top zip on at least one section.
4. It needs to stand upright, not flop over, so that from my desk, I can throw stuff into it.
5. It needs to expand from slim elegance to wide practicality but…
6. … Not so large and lumpy that it looks as if you’re going to Outer Mongolia after lunch.